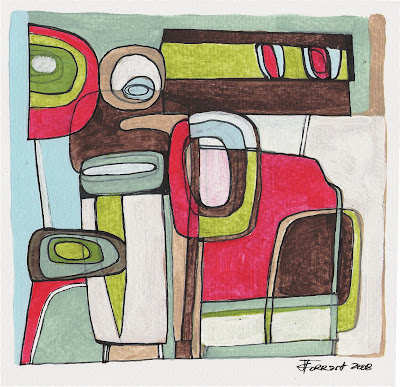 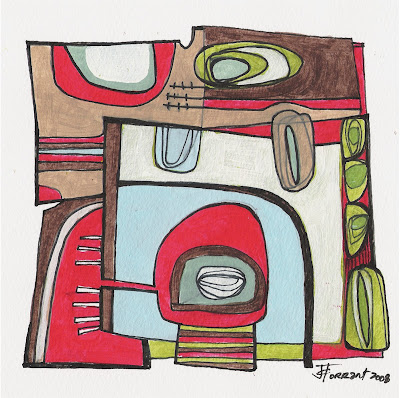 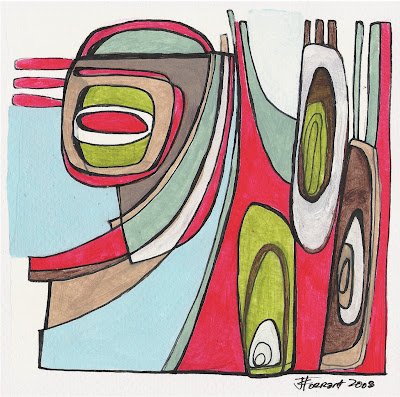 3 more (and my favorite so far!) in the Composition series.
Posted by Unknown at 8:57 PM 3 comments: 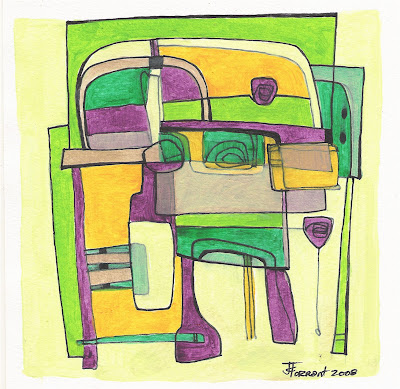 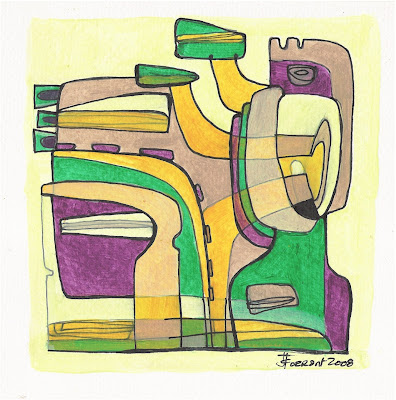 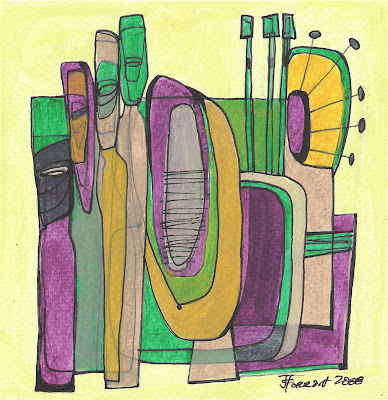 Posted by Unknown at 4:02 PM No comments:

Composition Series - A Work in Progress 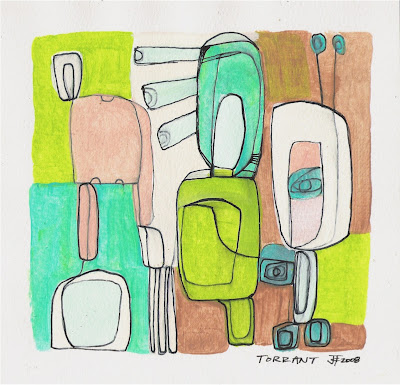 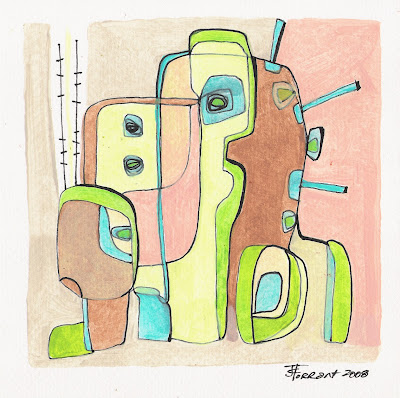 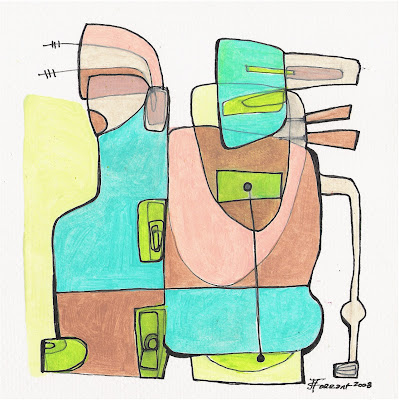 I've started a new series I'm calling Composition. Once again, I'm freeing myself of the duty of titling each of my paintings, thus freeing them up to interpretation. I have three so far that are sort of a set within a series. I'm going to keep working in groups of threes in different color combinations.
These are available in my Etsy shop at http://www.livefunky.etsy.com/.
Posted by Unknown at 1:00 PM No comments:

Here are my latest paintings. I played with mixing mediums in these, using charcoal, watercolor and acrylic paint. They are small - all on 6.5" square pieces of archival watercolor paper. I have titled them by number, Landscape 1, Landscape 2, and so on, and the images below go in order from 1-6. I like taking a break from titles sometimes. It keeps all of the weight and significance in the visual art itself, no distractions or suggestions. 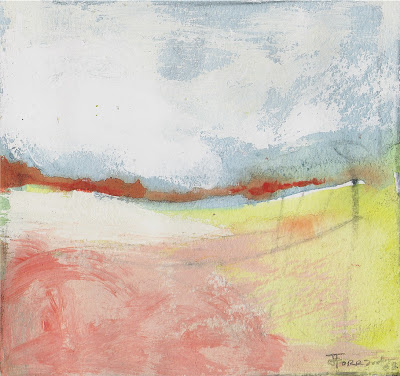 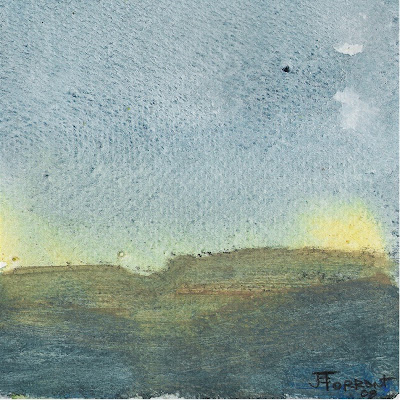 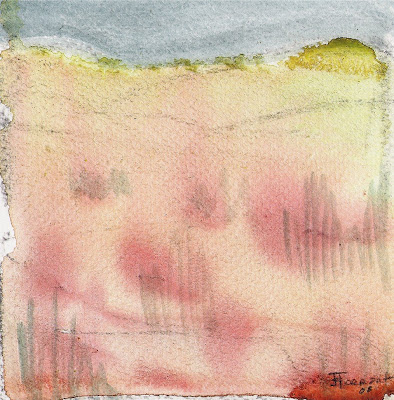 The painting above reminds me of the dunes on the Cape. It wasn't intentional, but now this is my favorite because of that connection (Rob and I have a beautiful history of trips in Cape Cod - from the early years when we were dating to our wedding and honeymoon). 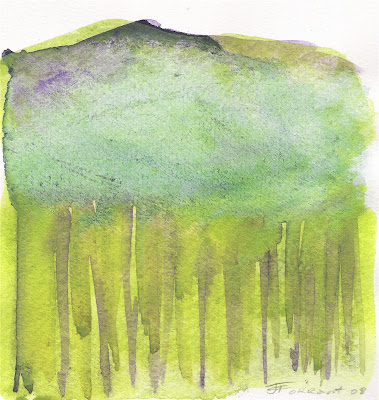 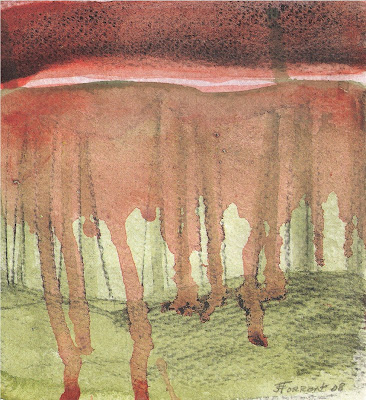 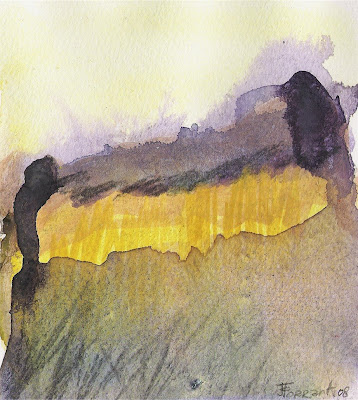 This last one is very abstract but I see a view I don't get to see anymore. The land across the street from my parents used to be owned by a nursery (plants not kids! haha) and it was just open fields and meadows with little collections of various trees and shrubs that were home to many birds and other wildlife. I spent my childhood playing there and knew the land like the back of my hand. It is now mostly bulldozed and covered with tidy green lawns and what we call McMansions (they aren't all that big in comparison to some developments, but they certainly don't melt into the natural surroundings). They paved the road up to the end of the development and a loop road cuts back into the property. I recently took the drive and it was just so strange. I knew each location in my soul - that's where I went sledding by myself or with my dad, that's where I made out with my first boyfriend on a starry night, that's where I painted that painting for my grandmother when she was living with my parents in her last days. I've mostly gotten over the loss of that land, but it still stings. So, long story, but Landscape 6 reminds me of the colors in the meadow you could see all year round - purples and golds.

Sometimes I Think I Can Fly 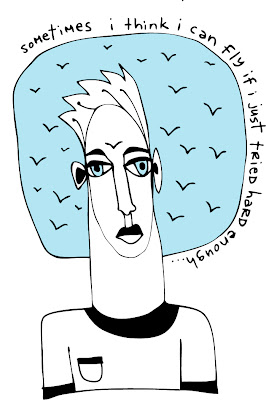 New print in my Etsy shop at www.livefunky.etsy.com 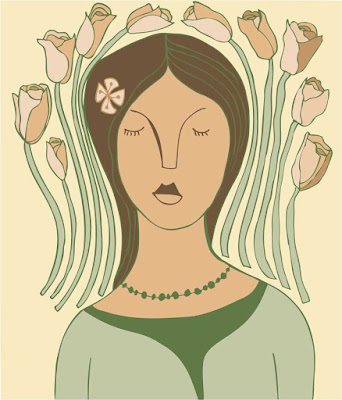 Here is my latest drawing digitally colored in Illustrator. I think it speaks to connecting to my feminine side a little more lately, at least in my heart and spirit. Also, it's about surrounding myself with the pure and beautiful elements of life. There is so much hate/war/ugliness in the world that sometimes I need to close my eyes and block it all out and only think of lovely things like sunshine and rainbows. You can call it avoidance, I call it survival!

This image is now available as a hand signed print in my Etsy shop at http://www.etsy.com/view_listing.php?listing_id=16429237.

Weekend Sale! 20% off of everything in my Etsy shop! 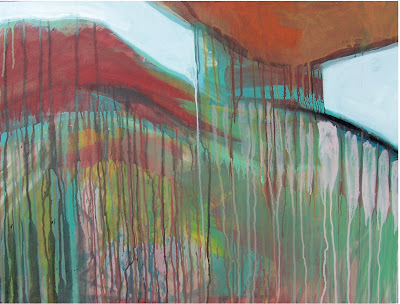 Visit my Etsy shop this weekend for a special sale! 20% off of everything in my shop. You could save lots on my larger work, so if you like my pricier paintings, now is the time to buy!

Posted by Unknown at 3:23 PM No comments:

Hey folks. I posted just last night about signing onto shophandmade.com. I only listed one painting for $60 and woke this morning to an email from a friend wondering what the price of the painting was because it said $0 - she wondered if it had sold. Optimistically, I checked to see if it had and discovered it didn't sell, but the price of $60 was still showing up with an X through it and this new price of $0 next to it. What? I emailed them about the problem and didn't get a clear answer, just an answer about another issue I asked about. Feeling frustrated with the whole ordeal, I emailed again to request them to delete my account. I got a response that that isn't possible. I have never experienced this with any other site I've worked with, and I've been on plenty. I couldn't delete my profile picture or my banner, but I replaced all of my shop info to just repeat LiveFunky.com. If I have to be on there, at least I can redirect people to my own site.

So I'm sorry if my previous post may have inspired anyone to sign up. I hate to think that I recommended something that I didn't really explore every aspect of. Lesson learned, and to those who are using the site, I hope that they work out their kinks and sales start pouring in for you all. As for me, this first impression was not a good one at all, and I doubt I'll be back. Well, maybe after a year and lots of other people's praise from personal experience, but not until then.
Posted by Unknown at 4:44 PM 3 comments: 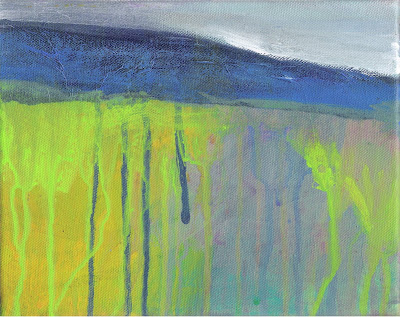 A new painting now available in my Etsy shop at www.livefunky.etsy.com.
Posted by Unknown at 11:35 PM No comments: 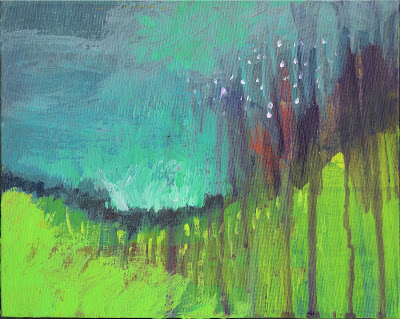 I had SUCH a great day today, hanging out in the studio with an old friend from home named Todd. He brought over a found object piece he had been working on for his daughter. This project is made up of all kinds of things, from scraps found in his father's shop, to found objects on hikes, to random hardware like door knobs and handles that his daughter loved to carry around in her tool chest (a chip off the old block, she is). Some wood pieces are carved, or drilled into as nifty pencil holders or containers for odds and ends. Todd brought his almost complete gift to my house for me to add my touches with paint. It turned out I was able to contribute a few other trinkets as well that I thought she would enjoy.

Now... I just have to say this. Some people wouldn't get it. It's not your usual girly dollhouse with a picket fence that daddy built or anything. But I absolutely love it. And the little girl in me does too. Being a quirky, natural scavenger myself as a little girl, I would have fallen in love with this wild playscape and added my own collection of various shaped and sized critters and found objects. Todd and I had some great conversations today as we worked, and I know he won't mind me sharing that some of those conversations included what it's like being quirky (which we both are) and how sometimes people can't really understand it. Like talking to ourselves, or bouncing between different projects at once when you get excited, or following your intuition rather than a map. There's room for all of us in this world, and when I think about my friend Todd, I thank God for people like him on this Earth. He is constantly meeting new people and befriending them wherever he goes, and he's a roamer. He has passionate and creative ideas and he pursues them right away, not in a rush, but not put on the list of "someday I will...". I've got more to share about Todd, but let me get to what we worked on today... 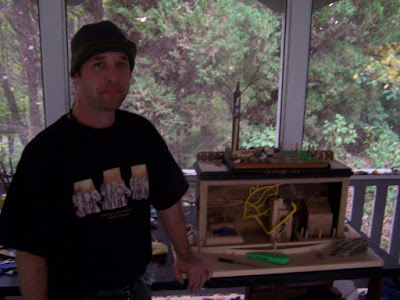 Todd and the project. 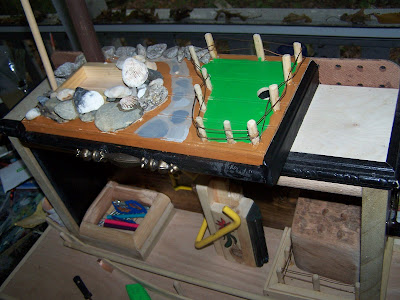 Top showing the shells and rocks and the painted pasture and stone path. 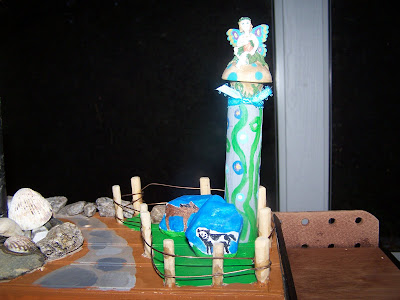 The pasture with little rocks I painted to be moved around. One with a cow on either side, another with a horse. Behind that is a little fairy tower that is removable (tada! fairy wand!) with painted flowery vines and a little ribbon with this fairy figurine I had hanging around among my collection of random items. The animal rocks (and any of her added animal friends, which I'm sure she has) can hang out in the pasture or get daring and jump the fence! 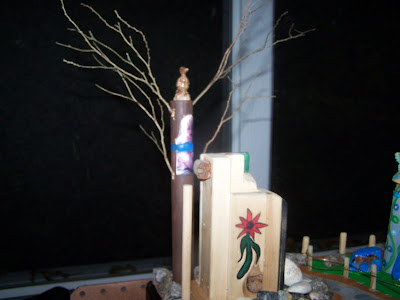 The tree is another removable dowel painted brown with real branches, a photo of Todd and his daughter and a porcelain bird figurine I got in a box of teabags on top. The wood piece with the red flower on it is also removable and it has slots for her tools, or a feather, or a pretty leaf - whatever new treasure she discovers that day. 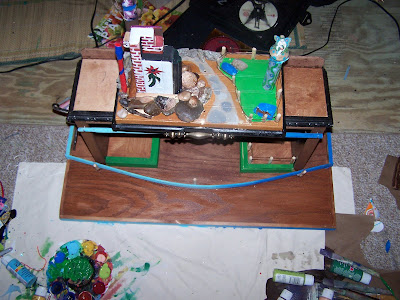 The view from above - almost finished. The wood piece with the flower turned into a brick building with a window on the side with a cat in the window. (GAH! I wish I took more pictures! There are so many details!). I should add, those stones and shells are glued on and finished, so they have a cool shine, and the stones in the back wrap around like a stone wall. Todd stained most of the wood and I just added little touches of color. The green square on the bottom has another little fence around it, and the other one is more like a platform for a little box with hand carvings that I painted in two shades of green. I wish I had a picture of that too, but hopefully I'll get some updated pics when she gets it. 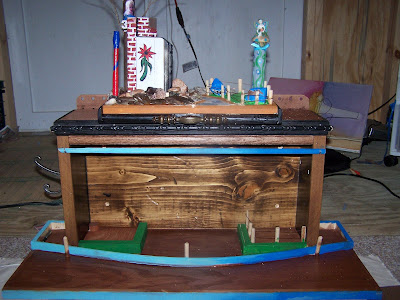 Here it is, finished for the most part. The blue dowel will be getting a curtain and he also has this funky fish sculpture thing that will go in there (seen in the first pic) and two other wood objects. I painted the dowel first in this subtle gradation from dark to lighter blue and continued that with other the other elements of trim.

Ok. I was introduced to the amazing music of Fela Kuti today. Here is a clip for your enjoyment.

I've got more to share about Todd and what he's up to, but I'll be saving that for tomorrow. Good night and peace.

Posted by Unknown at 8:21 PM No comments: 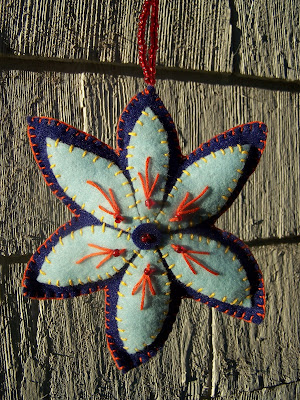 The crafty bug has hit me and I've been making these felt ornaments with hand embroidered and beaded embellishments. After several test ornaments, I have two new ones that I think are up to par to list on Etsy. If these sell, I'll be thrilled, but it's not why I'm making them. It's just, quite simply, fun! I feel connected to the kid in me that used to cross stitch and make friendship bracelets with embroidery floss. I also feel connected to my Grandmother, because the patterns I am coming up with really remind me of the Hungarian folk art patterns that moved me as a young child. You can find my ornaments in my Etsy shop at www.livefunky.etsy.com.