A rainy day is an invitation to get your goof on

It was a downpour day and I didn't feel like getting into my larger paintings only to be slowed down by drying time so I worked on some smaller things inside the house. First I carved a funky face stamp then I started playing around with collaging the stamped image into ACEOs. On any other day I could have gone in an entirely different direction with this stamp - called it starchild or mystic dreamer. But I wasn't in that kind of mood today. Instead, I named him Dude. 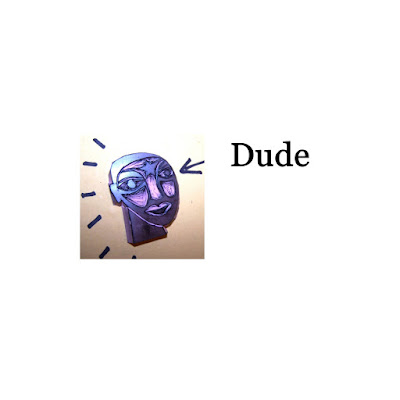 And then I made this ACEO and listed it on Etsy. It's called Dude Says Yes and this is what I wrote in the listing. "Dude is a new handcarved stamp I made - he's a pretty cool dude. I'm working on a mini series of original ACEOs featuring the Dude stamp and in this one, he's agreeing with you. Which is a plus." 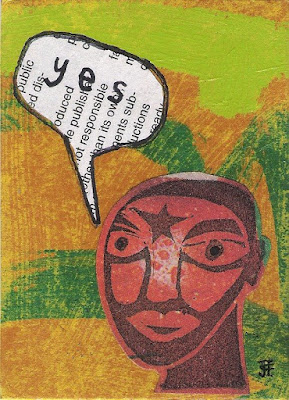 This next one is called Dude Just Looked Straight Into the Sun - Dude, you can't do that! 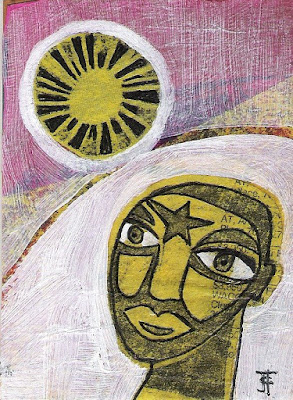 Dude's about to get into all kinds of situations. I'm thinking of possible themes such as:

Dude Just Stole Your Loafers (first typo was "Loathers" hmmm, wonder what my psyche was trying to tell me with that one?)
Dude Says Surf It Out
Dude Wants a Falafel
Dude Can't Catch a Break

Check them out at http://www.livefunky.etsy.com/
Posted by Unknown at 8:34 PM

Too funny, Dude looked straight into the sun!ha!
And thanks for the movie ideas, I don't think I've seen any of those defiantly adding on my Netflix list. I agree the psychological thrillers are so much fun :)

Oh Heather, I'm so happy you could chuckle at my random humor.

And yes, top of the list I mentioned should be The Uninvited. I wish I had kept the video longer so I could watch it a second time. Let me know what you think of it!

I find the Small Works absolutely adorable!! Like little loving glowing aliens loving each other! Will you kick me out yet for the strange compliments I give?

you crack me up! love these - thanks for the laughs. so great to see you infusing humor into your art. you are a very funny lady afterall... :)

Oh Maria. Did you read my post? Strange is my middle name baby! haha I LOVE your comments. Keep 'em coming!

And thank you anonymous lady. I love you and Dude is telling me the waves are gnarly out in SD. We've got to come out and visit you.

Dude is super cool. He cracked me up!