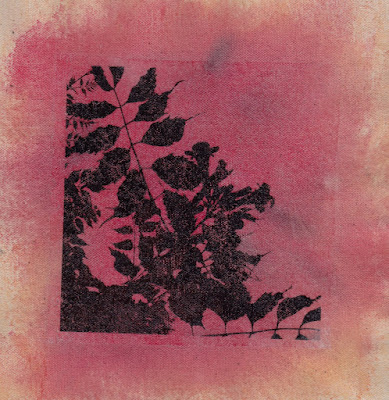 Having a blog that's all about the process of making art (well, at least 90% of it) inspires me to keep my camera by my side or think about what I'm doing as if in front of an audience.

Other times, a lot of times, it needs to be personal. Undocumented.

So instead of giving my normal post in ridiculously full detail, here's my week of impressions (pun intended).

* Week started with a dream "seeing" new art I wanted to make/explore.
* Continued research I started months ago about photo transfers.
* Had test runs - many fails, lessons learned.
* Made lists, sketched ideas, spent a lot of time thinking out the process to achieve desired effect.
* More testing, better results, lack of materials (for now) to take the next step.
* Other art stuff.
* Celebrated four years of being married to the love of my life. :)

I'm finding patience in art making, I'm allowing my ideas to fully flourish in the time that they need. I'm also trying to let my initial inspiration flow into the next evolution of that idea. Keep flowing, keep moving with an idea or the thread of an idea.

Allowing creativity to happen organically sure fights against everything else my culture tells me. The whispers of the muse say I'm right on.

Congratulations on your anniversary!

Guess what? I dreamed about you last night - I had this dream that you were in the same exhibition I'm in right now and you had created work which I didn't instantly recognize as yours. Watercolour paintings.

Fabulous! Don't listen to society! They are against creative process. Listen to your muse. I love the new work! :-)

That is so cool Maria-Therese! I worked in watercolors yesterday which I haven't done in months and months - AND I've been thinking about your work because I'm using photography now too. I think there are some major connections being made between us!! Wish I could say I dreamed about you too, instead I dreamed about a mass of big foots or bear men that were taking over the earth. hahaha! An art dream would have been much more pleasant!

And thank you Sally! It really IS against the creative process, isn't it? The more I push away from those traditional expectations the closer I feel to the creative source. Right on!

is this a print? or a painting?

It's sort of both. I used a photo transfer technique with acrylic gel medium on a watercolor painted piece of unprimed canvas.