We pardoned the turkeys and made chicken instead 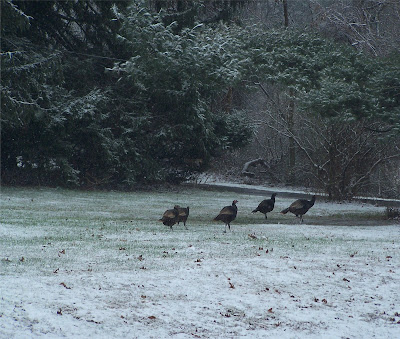 It's raining now, but we got our first snow recently and got to see the neighborhood wild turkeys strolling through our neighbor's front yard across the street. This isn't a rare sight, but it's not often that I have my camera on hand to capture them before they mosey on. Tonight I tried my hand at a recipe for Coq Au Vin I found on www.allrecipies.com. I love that site because you can just type in the ingredients you have on hand in the search engine. I typed in chicken breasts, carrots and onions and I happened to be intrigued by this one. Of course I was familiar with the name of the dish and when I saw the recipe called for pearl onions (which I have two bags of) I had to try it. I don't know how many of you out there enjoy these savory little onions, but I really love them just boiled, let alone roasted with other veggies and/or meat. Anyway, this is really an adaptation on the real recipie, and I tweaked things a bit given what I had on hand. I'll include how I cooked the side of potatoes as I think this was a good compliment to the main dish.
WHAT YOU'LL NEED

This is comfort food at it's best, my friends. You'll notice I'm not exact with amounts - most of this will be to YOUR taste. My husband doesn't like mushrooms so I didn't include them, but they are a traditional (and perfect) addition to this dish.