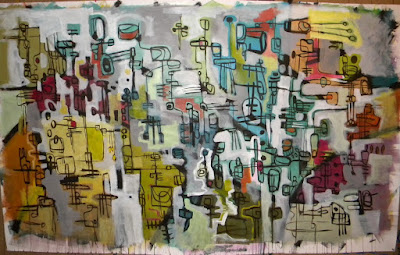 So much for taking a break from this painting...

Last night, after the kids were asleep, my husband Rob and I were down in the basement watching TV and I kept looking at this canvas and grimacing. I tried to explain to Rob the reasons why I was disappointed with it and how frustrated I was that I went in a more linear direction rather than a loose, expressive abstract style that I like (see my last post to see what I was looking at last night). It's HUGE - the largest canvas I've ever worked on - about 54" x 88". I talked about priming over it. I talked about cutting it in half. At that point he said "Whoa - no. Challenge yourself, Jess". I nod, ok, ok, you're right... and then he said "let me commission something from you" and then he described what he calls my "mechanical style" (basically it's what you see above, interwoven detailed design). I had considered that approach and I just needed a push in ANY direction so I ran with it and started digging into the painting again. Rob was looking on and at one point said something along the lines of "that looks awesome, and now that it's more detailed you can charge more for it!" which, to this highly strung artist (at the time), it just hit me the wrong way. I took a break from painting and talked about how that's the attitude that I struggle with - the perception that loose, free work is easy when it's actually such a challenge for me. Less is more and it's difficult to achieve. I pointed to the canvas with my evolving patterns and said "that's easy for me" at which point Rob stopped me and proceeded to blow my mind. He said it's easy for me because I'm good at it. That whenever we've drawn together he tries but can't do that style. He talked about how when he's sat down to write something that isn't his usual style he struggles with it, but when he does what he's good at things just flow. I don't know what inside of me resented what I do best and wanted it to be something different, but when he said that a light bulb went off that yes, this does come naturally to me and it's FUN and it shows. That conversation opened the floodgates, took away all frustration and the paint flew until moments before dawn. (Thanks Rob, my rock for all occassions).

I'm really happy with this piece right now. It's going to progress from here, but don't worry, no more whitewashing and starting from scratch from this point forward. Just some fine tuning and it will be complete soon.
Posted by Unknown at 4:13 PM

That's exactly what happened to Jackson Pollack on the Mural painting. It took him over 5 months before he started painting it in 1 15 hour burst. Beautiful work :)

congratulations on working through all this ~ have really enjoyed reading about your processes and such personal thoughts about what you are doing here.
weird that resentment ~ wonder where it comes from and why too. is it tied up with confidence? what you think you should be doing? {that influence can come from a million different subconscious places!} . . .
you are lucky to have your man to discuss these things with :)

Door Number Three looks like the right choice. Looking forward to seeing the finishing touches on this version! :-)

Words of wisdom worth repeating from your post the better to remember it: "I pointed to the canvas with my evolving patterns and said "that's easy for me" at which point Rob stopped me and proceeded to blow my mind. He said it's easy for me because I'm good at it." Creative types would do well to keep this in mind.

Thanks for the mention!

Thanks for posting Erika and congratulations about going full time with painting (just read your blog).

Belinda thank you! The resentment aspect... I think it is tied into comparing myself with the work of other painters that I admire. But as it says in the Desiderata "If you compare yourself with others,
you may become vain or bitter,
for always there will be greater and lesser persons than yourself.". And yes, having my best friend and partner by my side to discuss this all with is priceless!

CountryDreaming thanks for that - it was my aha moment for sure. :)