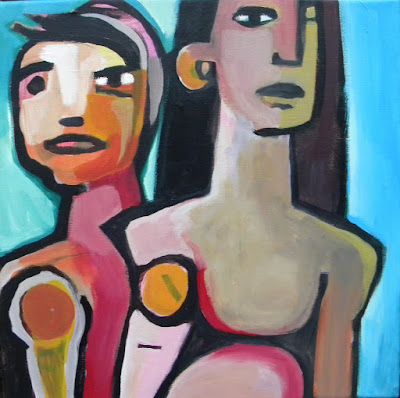 This painting began as two figures I saw as male and female. As the piece progressed, I realized I was painting a self portrait with two different versions of myself - a younger me on the left (when I had short hair) and me now on the right, or maybe me in the future? Either way, it sort of hearkens back to a painting I made for our final show in college seen below. Still contemplating identity, still questioning if I will be a mother someday or not. Ten years later, still wondering what kind of woman I'll become... 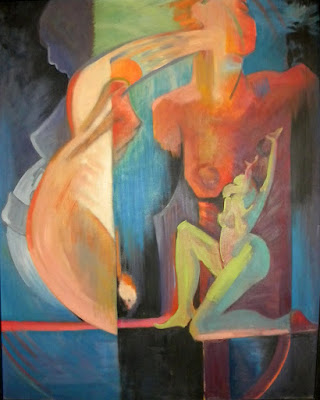 Great piece and history behind it. I love looking at your work, perhaps because it gives me so much to think about!

Very interesting piece! I love to see the evolution between where you left off in college and where you are now. I find myself thinking along those artistic lines a lot lately...

Great to see all of the new work! Very inspiring!

Isn't it amazing how we as women, artists, wives, mothers, evolve? Even in the few years we have "known" each other...I feel you and I have grown in so many ways. You definitely helped define the artist within me that currently exists and I am sure you will help me grow in the future. Very inspiring piece! Thanks for it all!

Thanks so much lovely ladies! Meg, the feeling is mutual my dear. :) Love to you and the fam!