Harry and I had a productive day

A few weeks ago, this beautiful woodpecker got himself stuck in our screened in porch. It's a common phenomenon for local birds as we have two doors wide open all the time that they can fly into and, sometimes, not find their way out of without a little assistance. Last year I cut a trap door in one of the screens for a feathered friend, but this woodpecker wasn't finding it - he bounced along the top edge pecking away, probably wondering what strange part of the world he had found himself in. Finally I cut another slit in the screen along the top of a panel and he found the escape route in no time. Rob and I thought he was so beautiful, we looked him up online and discovered he was a Hairy Woodpecker - naturally, I named him Harry.

So today, while painting in the studio in the backyard, I heard the unmistakable knocking of a woodpecker - could it be, my red headed friend, Harry!? 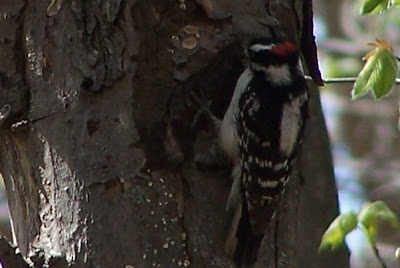 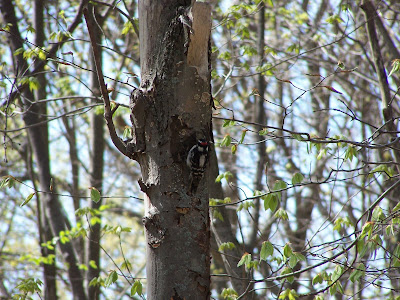 Why yes! There was Harry - or not - let's just assume it was the same bird. He was so concentrated in his work, he never noticed me sneaking up on him to take his picture. While I'm alone working during the day I chat with the wildlife - the black butterfly that loves the forsythia, the pair of robin lovers that flirt and flutter around the yard, and now, my main man (or lady?), Harry. I love the sounds of the forest. The many bird calls are like a dense symphony. I put words to certain calls today - one bird says "Vick! Vick! Vick! Vick!" like a hyped up fan chanting the name of their favorite rock star. Another exclaims "my tea! my tea! my tea! wait!-wait!-wait!-wait!-wait!... (and as if on second thought) no,,,, no,,,, no" and yet another says "whaaaat?" like it's unsure of itself. At least that's what I hear. This is what's going through my mind working out there... I know, crazy right? Yet somehow this sort of stuff keeps me sane. Go figure. 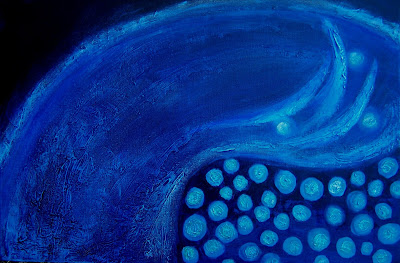 This painting is coming along. It's a work in progress still and I took this picture just after the sun set so the colors/contrast aren't exactly what they are in real life but you get the general idea. I worked over the whole surface with a unified color and now I need to get back into those circles and develop them the way I see them in my mind (ethereal, glowing orbs). I'm thinking warmer tones will be reintroduced and that will alter how I handle the rest of the piece. The painting is called Leaning and it's part of this new series I've been developing called Relations. The series is an exploration of the many elements of human relationships, expressed in an abstract language. In Leaning, the thick wave of blues represents exactly that - a wave of the blues - arching over, anticipating the downward direction until it is lifted by the light and love of others. The band is broken and pieces of it turn upwards, inspired in light by the help of a loving influence. I'll write more about this series and each piece once they are completed.

I love figuring out what birds are saying! When I lived in Massachusetts I heard the cardinals say "two-cow, two-cow, two-cow". The robins would say "chalk! chalk!" whenever they were annoyed. Of course the chickadees said "chick-a-dee-dee-dee". Delightful!

Wonderful post! I've never seen a real woodpecker (being Australian) - what a treat to get so 'up close and personal' with one! Your environment sounds wonderful, no wonder you are so inspired in your painting.
Maisy xox

Maisy - It is such a WONDERFUL change being able to work outside now that the weather has changed. I'd love to visit Australia someday and get to know the creatures you get to see regularly.