painting till the sun goes down 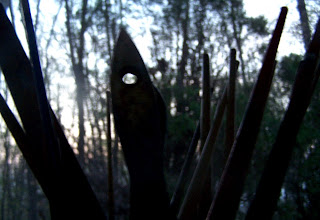 It felt like summer today here in Connecticut. Out and about on the town I heard typical weather talk "hot enough out there for ya?". It's so funny to me how we all complain about the weather for most of the winter and the first day it gets over 80 everyone is saying "hot enough for ya?". I responded with a giddy, "I love it!" because I really do. Flip flops and tank tops - that's how I roll. After I got back from the post office I started painting in the studio and couldn't walk away until the last bits of sunlight faded in the sky.

The other day I got a new batch of canvases from Jerry's Artarama in West Hartford. I absolutely love that store and hope it never ever closes. I wonder how the economy has been treating them... I'm hoping people being inspired to make stuff themselves has kept business steady. I was happy to see a good amount of customers there, so fingers crossed I can rely on that relatively local resource for years to come. The University of Hartford has a fantastic art program and most of the youthful staff are students. I love the energy and camaraderie between us artsy folks. While looking for canvases a sweet older woman with sparkling silver hair was picking out a box canvas and stopped an employee to ask if they had gallery box frames for that size. They didn't but he suggested using heavy duty stretcher bars to create the same effect. She thought he was out of his mind at first saying "but the canvas goes over those" and then he showed her how it would work as a frame and she was so delighted. I had to comment on the great idea as well - I had never thought of that! She and I had a pleasant exchange standing there in the canvas isle.

I also noticed a woman with her husband picking out a frame for a gorgeous original landscape painting, presumably painted by her. I lingered just long enough in that area of the store to gaze in admiration at it. At the counter checking out, I had to hem and haw over my purchases staying within my budget - keep this paint, take out that 16 x 20. I'm over being embarrassed by situations like that. It is what it is. I've got 86 bucks to spend, I'm going to try and get $85.99 worth of supplies. The woman with her frame was waiting on the other corner of the counter watching my transaction with a smile and kind eyes. As I was leaving the store trying to manage two large bags of canvases and three 24 x 36's under my arm, she offered to help hold the door for me. She said something along the lines of "brings me back to my college days" and then said "best of luck to you" as I thanked her for her help. I love that stranger for her spirit, her obvious love of the craft, and most of all, because she thought I was young enough to be a student. ;) Weeks away from my 32nd birthday, it's appreciated! 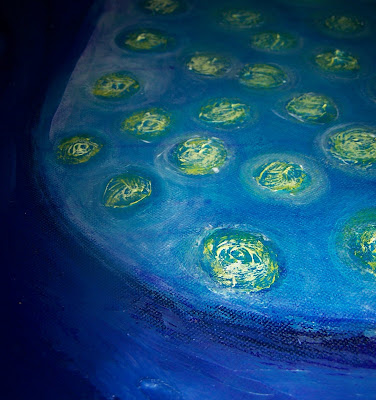 Today I worked on three canvases for a new series I've been thinking about and sketching for about a month now. With so much build up, it was a little intimidating to get started. Almost immediately I realized that sketched ideas are one thing, these pieces will be flushed out in paint in ways I hadn't expected or predicted - as they should be. The last thing I wanted was for these paintings to be over calculated and planned, and flatly executed. In the picture above (taken with a flash at dusk) you can see some of the textures I've been playing with in this particular piece. Each of the circles was built up with texture medium and then once dry, I caught the edges dry brushing over in yellow and white. I have multiple jars of Golden brand texture mediums I bought years ago when Michael's had a moving sale and it's taken me until now to start to experiment with them. You can kind of see the sort of textures I created with a palette knife and texture medium in the blue/purple foreground. These new paintings are going to be a little different than usual and it's been a positive challenge for me so far. Think outside the box. Don't get too committed to a surface - rough it up, refine it, then rough it up again.

Tomorrow is a new day and I'm looking forward to a fresh re-introduction to these paintings and some experimental abstracts outside of the series using more of that texture medium. I should have some work in progress shots tomorrow night.
Posted by Unknown at 7:39 PM

Sounds like you're working very hard AND having fun - one of my favourite places to be in! :) :)

I tagged you - if you wanna play along!

You are in great spirits, Jess! I am so happy for you :) So much energy and enthusiasm for your work and your life. Thank you for sharing your positivity and process.
xoxo kz